With the development of mobile network technology from 3G to 4G, then to 5G, there has been consistent growth of Mobile data traffic. In order to meet the peak throughput brought by the new technology, Base Station Antenna must have a continuously development too.

ABI Research points out, in the future base station antennas will develop toward the trends of Multi-Band/Multi-Port, Multi-Beam, Active Antennas, Hybrid Active Passive Configurations in MIMO (Multiple-Input, Multiple-Output), Massive MIMO and Sector Sculpting and RET Solutions. This increasing complexity is compounded by space constraints on the macro base station towers themselves.

1. Multi-Band/Multi-Port antenna, compared to single antenna supports more spectrums and channels, and to get a better MIMO function.

In 5G era, 4G is in coexistence with 5G. Cellular Operator faces the increasingly complex challenge of the limitation about Site space and load-bearing. A multi-port antenna needs to cover all the 2G&3G&4G&5G bands. According to the Statistics of ABI Research, 56% sold FDD antenna are 6 ports. Multi-Band/Multi-Port has become a mainstream trend.

3. Active Antenna as well as Simplify Antenna improve the efficiency of the deployment and network performance.

Active antenna is integrated with RF parts, connecting antenna, RF and Baseband via optical fibre. Compare to common passive antenna, Active antenna could reduce the cable and power loss during deployment; moreover it could simplify installation.

4. Hybrid Active Passive Configurations in MIMO provide a better performance and wind load, simplify Massive MIMO deployment, reduce the time required for site access and speed up 5G business on-line. Meanwhile, as an integrated module, it could reduce the antenna wind load and effectively solve the problem of load limitation of the Base Station.

Massive MIMO could change the shape of antenna beam by 3D Beamforming, and then revise the antenna coverage range. It concentrates the radiation energy on the Terminal, which significantly improves the spectral efficiency, thus to increase the throughput of sector.

Previous: No Data. Next: No Data. 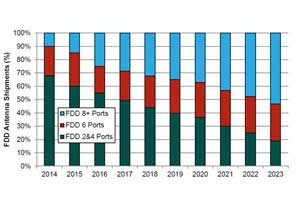